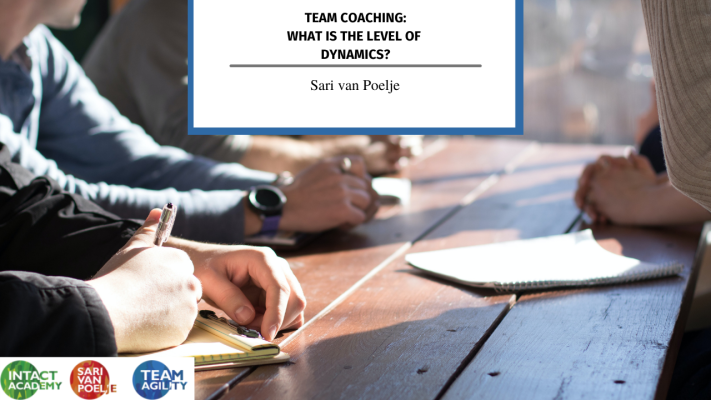 Team Coaching: What Is The Level Of Dynamics?

Hi, my name is Sari van Poelje. I’m the Director of Intact Academy where we teach coaches and consultants to do executive coaching and team coaching, and to become supervisors of coaches. I also run a business called Agile Business Innovation, where I help businesses innovate more quickly than their products. If you want to know more about that please go to http://www.agilebusinessinnovation.com.&nbsp;

We’re talking about team coaching. We have talked about what it is, the focus that you need to have and the levels of diagnostics you need to have. Now we’re taking the levels one by one to figure out what it means. We talked about the structural level, and now we’re talking about the level of dynamics, otherwise called the interpersonal level, or relational level. It’s about how people relate within the team. If you’re doing well, the relationships between the people in the team are such that they’re willing to give each other the benefit of the doubt, and that they’re willing to support each other. If one person has a problem, the other person says, “what can I do to help you?”. What’s also an ideal team for me is when it comes to the wire and everyone gets together, and does what needs to be done, regardless of their status, or their position, or their role in the team.

I see the dynamics are going well, if there’s cohesion, if people want the team to survive. Then I usually see them helping each other, complementing each other, doing what needs to be done, disregarding their egos, and working together seamlessly. Where one drops the ball, the other one picks it up.

Truth be told in 35 years, I haven’t experienced a lot of ideal situations at the beginning of the client request. Usually, I see teams that are in disarray, both at the structural level and at the dynamic level. What you see is that people have conflict, or there’s latent conflicts, people are just focused on their own thing, and not willing or able to deal with other people’s problems. I see that the leadership is not focused on creating cooperation as a task. I also see that there is a very strong, informal leadership that undermines the formal leadership. This is when it’s bad. I talked about when it’s good, this is when it’s bad.

When I look at teams at the dynamic or relational level, the first thing I look at is; What are the levels of games being played? Is it a kind of basic irritation that people are expressing? Or is it to the level of ‘if they continue like that they’re getting fired’? We look at the intrigue, the games between the members, or we look at the agitation, the games between the leader and the members. If the level is high, one of the things you should focus on as a team coach, is to de-escalate those games, to teach people about conflict and conflict management, and how to give feedback. That’s usually a competence that’s missing, rather than a conscious manipulation. I find most of the people I work with are okay people, they want to do the best they can. Sometimes they get caught up in a system where there’s a lot of dynamics going on that they don’t want. You have to teach them something about games, about conflict management, about de-escalation. I often teach them about soft starts, but we’ll get to that later.

The other thing I look at is whether people are expressing themselves in their role. Is it Like a military team where everyone has to be exactly the same, like an identikit of Marvel Comics? How much can you be yourself in that team? Actually, the more people can also be different in their roles, the more sustainable a team is. The inverse is also true. The more people have to over adapt to whatever the leader thinks they need to be in a role, the less sustainable the team is. I also look at; Do you have room for expression in this team? Is there room for emotional expression, for intellectual expression or for dialogue? We call that persona.

The next thing I look at is social distance. It is interesting, we have theories about time and time management in teams, but we don’t have theories that relate to space management. I mean, literally, the management of proximity. I’ve talked about that in other blogs as well. One of the theories I use is Edward Hall with his Proximity Theory. He talked about different levels of proximity people have; intimate, personal, social, public, and how that plays out in the way you interact and manage your proximity map in your life. The same goes in teams, there is a proximity map.

The thing that disturbs a team most is if there are favourites for the leader. If some people are closer, or experienced as being closer, and some people are being further from the leader, that’s something that causes a lot of dynamics in teams. The other thing is when a team is more mature, when there are couples in the team, or if there are bands of brothers that stick together. When decision making comes along you can almost predict how they’re going to swing their votes. I look at who’s close and who’s far from a leader. You can do that through socio-grams as well. I look at how we can create more balance in this distancing within the team. The more equidistant and close people feel, the more sustainable the team.

The dynamics, the persona, the social distancing, also determine how much influence people have in teams. You can imagine that if you’re closer to a leader, you feel like you have more influence. You probably play an informal leadership role. If you’re the one who controls the dynamics in the team, you have a lot of influence in a team as well.

If we make people aware of the dynamics and create more cohesion in a team, if we allow people to be more themselves in a team, and if those distances are managed well, as if by magic, the influence becomes more divided amongst everyone. Everyone can participate and have influence. That makes a team more sustainable.

The question for you is; At what level are you playing games in the team? Is there enough cohesion in that team? Can you be yourself? Are their favorites? What kind of effect does that have in your team?