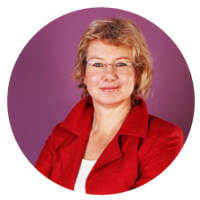 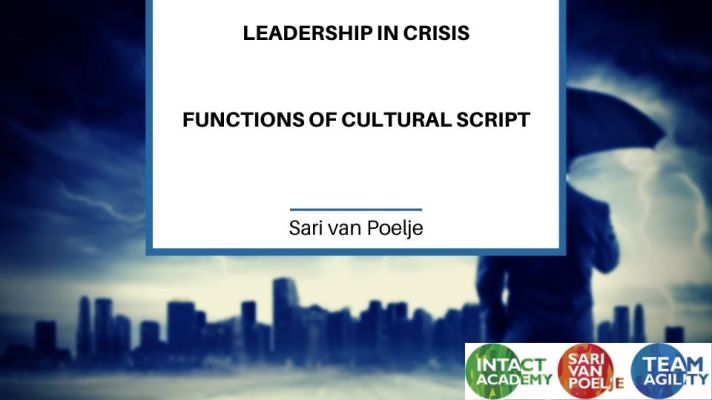 My name is Sari van Poelje. I’m the director of Intact Academy and Team Agility. At Team Agility we help businesses innovate more quickly than their products and become agile in a turbulent environment. In Intact Academy we organize training programs for coaches and consultants to help businesses innovate. I’ve been a consultant for 35 years and a leader in multinational businesses for 23 years, and one thing I’ve learned over time is how to deal with crisis.

One of my mentors used to say: “Freedom is not the absence of responsibility. It’s the ability to choose what you’re responsible for.” And I think that’s a beautiful definition of autonomy. And one of the things I’d like to explore is why do we maintain cultural scripting and how can we go more towards autonomy, especially in these times of crisis?

Why we maintain cultural scripts

Survival: In extreme times a cultural script helps us define who belongs to the tribe and who gets scarce resources. So from toilet paper to gasoline, to who’s allowed freedom of movement.

Meaning: If you know the etiquette, the techniques and the character of a culture, you understand what feelings, thoughts, and behaviours are accepted and significant in a group. So you can place the behaviour and the thinking and feeling within the context that gives meaning and truth to you personally, but it only also has meaning within a certain cultural context.

Sometimes we forget, and we see a behaviour and we think, Oh, I know what that means. But actually you don’t. You don’t know that shaking your head means no. In some countries shaking your head actually means yes. You have to check within this time of Covid19 especially because these cultural scripts about survival and meaning are really coming up.

For instance, some people ask me, how is it possible that in Sweden we didn’t have a lock-down? How is that possible? I lived in Sweden for four years and just started to scratch the surface to understand them. What I understand is that in Sweden, in Scandinavia, people are extremely rule bound and focused on “we”.

I remember conversations where we were talking about taxes and people in Sweden said, “We like paying taxes because it’s good for society.” Now you would never hear a Dutch person say that.

When the Swedish government said, “Look, we’re sick, you have to keep distance, it’s better to do this,” and gave guidelines not rules, the people naturally followed because people in Sweden are “we” focused or focused on the well-being of society when push comes to shove.

This cultural scripting that gives meaning, and surviving, is really important. And this measure that Sweden introduced would never work in Holland because it only has meaning within that context. So that’s the frame I want to introduce – cultural scripting has different meanings for majority members of a society and for minority members.

There’s a great book by the Levin brothers, written in 1982, called The Functions of Discrimination and Prejudice. I really recommend it. They were talking at that time about racism and sexism. They said one of the major functions of cultural scripting for the majority members of the society is the displacement of frustration and aggression. If you have someone who is seen as “less than” in a society, it is a way to displace frustration within that society. Now in a very strange way, for instance, in the United States, what you can see and at a societal level is that even though the government is bankrupt, as long as they have an external enemy, people are not focusing on the internal problems. Cultural scripting is a way to displace frustration and aggression.

The other individual function of a cultural script is that it protects self-esteem because you compare yourself with a negative reference group. You can always say, I’m better than that person. So if you say unhealthy cultural scripting is based on feelings of supremacy, then if you feel better than the other person, you also feel better about yourself.

I remember when I was a child and I wouldn’t eat all the food on my plate, my mother would say, “Oh, there are people in India who have it worse than you.” And there was always a mixture of guilt and shame, and also a bit of, “I’m supposed to be grateful here for my cultural context.”

The other reason that cultural scripting is maintained at the individual level is that it reduces uncertainty because we use stereotypes. For instance, my mother who said, Indian people have it worse than you do, so you better eat your food. Well, to be honest, I’ve travelled through much of India and yes some people might have it much worse than me, but some people certainly have it much better than me. But reduction of uncertainty is also a function of the brain. As long as we use stereotypes, as long as we can categorize, then cultural scripting has a place.

Why do we keep cultural scripting going at a societal level?

I’m interested in why we keep cultural scripting going at the societal level because that’s really interesting especially in this context of Covid19.

We know that a cultural script, an unhealthy cultural script certainly, gives economic advantages to the majority. So if you are a majority group member, you get an economic advantage. We already know that scarce resources go to members of your tribe. So in Covid19, for instance, one of the interesting things was the discussions about face masks. In some countries individuals have to wear them too. And then other countries, like in Holland, we knew that face masks were better because obviously you don’t spread your fluids, your germs as much. We all know that people in healthcare need masks more than normal people. So, in a sense, membership of that group of healthcare workers gave an advantage and perhaps even an economic advantage.

In some types of business, you’ve got more subsidies than in others. When we look back later on Covid19 and we track who got subsidy and who didn’t, you can actually see which subgroups in the culture are more privileged than others.

The social function of cultural scripting is so that you can maintain power. So for instance, if you see the reaction to Covid19 in Hungary, where they’ve re-established an autocratic system, you see that people use scapegoating to maintain power. They target specific groups for not keeping to the rules to say, “See, we have to do this because if we don’t, we lose control.” And this is something that’s really subtle and very important to watch for also as a member of a society – who is being scapegoated and who benefits from that.

The other reason that we maintain unhealthy cultural scripting is to create a feeling of supremacy and to create cheap labour reserves. If we think that some people are better than others, they get more money and as long as some people are discriminated against, whatever job they’ll do, they’ll get less money.

Even in these times, women get paid less and there’s no reason for it because in terms of volume we are the majority, but in terms of cultural scripting we are the minority. It’s interesting that we accept that position given that we are the statistical majority. In actual fact it has an economic basis. As long as you have people you can scapegoat within your cultural script, they get less of the resources. Going back we can even argue that women are statistically smaller than men because they have endured centuries of getting the leftover food.

I’m a revolutionary at heart, so you must excuse this way of thinking. I still believe we can change the world. I think we should be more awake to these things.

Sometimes cultural scripting gives secondary advantages to the minority, but I wouldn’t wish it on anyone. Of course it’s true that if you are seen as a minority or in the cultural script of a country it creates more solidarity. So we think we women, we have to fight, we have to go on the streets. We can blame the system sometimes for personal failure. I don’t think a lot of women do that because they feel too ashamed for that, but sometimes it happens. There’s a secondary labour market created where there are women’s professions, and there’s a reduction of competition in that space. But I would never recommend this – it’s unhealthy cultural scripting.

It used to be quite simple to see because old fashioned cultural scripting was quite blatant. So we knew it was there. It was like women are more emotional than men for instance. But modern cultural scripting is very subtle and it’s rationalized. For instance, saying things like: “It’s a proven fact that migrants are more capable of crime than non-migrants.” A very inflammatory thing to say, however, factually it’s true that there are more people of colour in prison than not, but is it the chicken and the egg?

Cultural scripting used to be very blatant and much easier to handle. Now it’s much more subtle. But in times of Covid19 you see old fashioned cultural scripting coming back up. We see more victim blaming: “You shouldn’t have gone out without a face mask!” More avoidance of contact. More denial of the political significance of differences between us.

I think it’s much more dangerous nowadays and much more difficult to look at cultural scripting. One of the exercises I propose to you is to visualize your last uncomfortable meeting with someone from a different group. It can be any group and to track what you were thinking, feeling or doing when you met this person from another cultural script. And then to think, what would your father have or mother have thought or felt or done if they met this person from another culture. Think about how you may have been hurt by these messages and how these messages may impact your view of yourself.