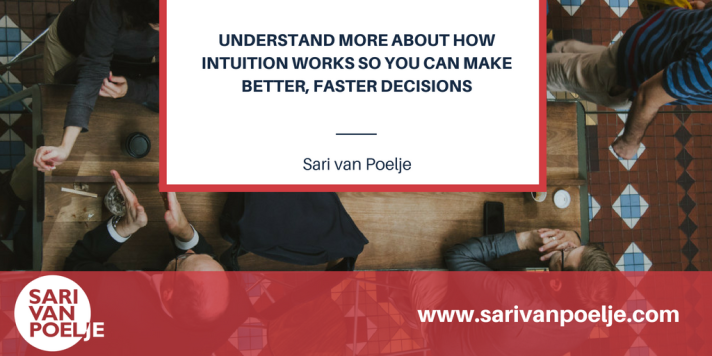 Should you rely on intuition?

One night we were in a small restaurant in Latin America. I am not really a drinker but I had had a glass of wine, or two. At a certain moment a young woman came in with an older and a younger man. Both were deferential – bowing, pulling out her chair for her. Fueled by good wine,  I joked to my colleagues – well that’s simple. The older man is her husband, and the younger man her lover. My colleagues grinned at each other and as one said – you’re right, you’d better go check. So I went up and explained we were a bunch of crazy psychologists just testing out our intuitions – as it turns out I was wrong. The older man was her boss, and the younger man her translator. They took it all in stride, but I was more careful about checking my intuitive sense before I shared 🙂

Intuition plays a large part in expert decision making. To  accelerate learning we need to understand more about how intuition works so we can make better, faster decisions. As we saw in the previous article, intuition is based on learning from experience. People learn from experience in a number of ways, for example we make mental connections between things that happen together in time and space – we’re wired to notice frequencies. These connections then become reinforced in memory.

We are genetically more prepared to learn the significance of certain stimuli and because we are the product of evolutionary adaptations we also possess learning that was more useful to our ancestors than to us today. In real terms this means we tend to fear spiders and snakes more than we tend to fear traffic and crime.

The frequency of connection between punishments and rewards affects the ease of establishing connections, and once a connection has been reinforced by an external reward people are reluctant to change their behaviour. The more complex connections give rise to rules, giving us the ability to infer relationships between variables.

In the real world intuition can be confused by statistical fallacies:

So, should we stop trusting our intuition? No, there are ways of building your intuition and learning when to trust it and when to question it.

Try the RATE to find out if your intuition can be trusted.

Think back to an intuitive decision you made recently. Now ask yourself these questions: